Both Amsterdam and London are two significant destinations in Europe. And very close to each other.

How far is London from Amsterdam?

Did you know London is only about 200 miles west of Amsterdam? The only problem is there a sea between the two capitals.

London-Amsterdam is a popular travel route with over 4 million passengers every year. Because of the geographical challenges, the primary mode of transport so far has been the airplane. But that's about to change.

With the new high-speed Eurostar from Amsterdam to London starting from April 2020, you can travel to the capital of England in just over 4 hours without a transfer. Allowing you to arrive relaxed and stress-free in the British capital. Trains pass through the Channel Tunnel between France and England.

This article contains affiliate links to products and services we love, which we may make a commission from at no cost to you.

Of course, it was already possible to travel on the Eurostar high-speed train to Amsterdam before. But you needed to change in Brussels to clear security, customs, and passport control. Adding quite some extra time to your journey. The train was competing on price with the airplane but when you looked at travel time, the plane still clearly won. With the new direct services, that is not the case anymore.

Is there a direct train from Amsterdam to London?

It has been possible since 2016 to travel on a direct Eurostar to Amsterdam from London. However, in the reverse direction, this wasn't possible yet, because the security building was not yet finished. That is now going to change.

Now the new security terminals in Amsterdam and Rotterdam are finished; you can travel directly between the two capitals in both directions without a transfer. Direct trains from Amsterdam commence in April 2020 and from Rotterdam in May 2020. Speeding up travel times by over an hour.

When you board the direct Eurostar train to or from Amsterdam, travel time is only 4 hours and 10 minutes. From Rotterdam, your journey time to London St. Pancras International is just 3 hours and 29 minutes!

That is city center to city center. Making the train a real competitor to flying, both on price and travel time. The Amsterdam to London flight time might be just 1 hour, but with taxiing, wait times, walking times to the gate, and airport to city transfers, you're looking at very similar travel times.

We personally now think the best way to travel from London to Amsterdam and visa versa for many people is by train.

There are two daily departures from Amsterdam and Rotterdam. A morning and an evening departure. Perfect for maximizing your day. On the return journey from London to Rotterdam/Amsterdam, there are three daily direct options. It's scheduled that later in 2020, more direct trains will be added to the timetable.

Click the banner above to purchase the card now or read our post if the card is worth it for you.

Non-Direct Trains from Amsterdam to London (with a transfer)

When you don't mind transferring in Brussels, you have many more additional departure options available every day. You can then either travel from Holland to Brussels by Thalys high-speed train (the train from Amsterdam to Paris). Or by intercity Brussels, this is a slower regular train service between Amsterdam and Brussels. With both trains, you will change at the Brussels South station. Here you'll clear immigration and customs (both for the EU and UK). Allow enough transfer time to do so (1 hour is recommended).

Check prices for tickets and the complete timetables (including the transfer options) here.

Before the direct Eurostar connection, only the airplane was a viable way to travel to the British capital. Sure, you can travel by bus too, but expect a travel time of 12 hours. Or the romantic option of going by Ferry. But that made your travel time even longer (and more expensive than a plane ticket).

Airlines and the Eurostar high-speed trains are now direct competitors. There are benefits and drawbacks to both options. We've listed them below to make more sense of both options:

Check prices for the Eurostar and book your train tickets here.

Standard Class is comparable to 2nd class. Most seats on the trains will be in this class and offered at the lowest price. Power outlets are available under your seat. Food and beverages are available for purchase at the "Cafe Metropole" dining car.

You can compare Standard Premier with first-class on regular trains. You have more space when you travel in this class. You'll enjoy more legroom, seats are wider, and your seat can recline.

You'll be served a free light meal and complimentary drinks at your seat. Plus, you have a choice of free magazines. Premier coaches have dedicated staff available. Of course, every seat has a power outlet as well. In Amsterdam, you'll have free access to the NS International lounge before your departure.

​In Premier Business, you'll enjoy the same type of seat than in Standard Premier (1st class seat), but you're traveling in a separate carriage. The main difference between Standard Premier and Business Premier is the flexibility of your ticket. You can change it at any time.

​Premier Business also allows you access to the Eurostar lounges, for example, in London. These lounges are just as luxurious as airline lounges. They serve food and even have their own cocktail bar. And when you travel Premier Business, you'll be served a full 3-course meal designed by Michelin-starred chef Raymond Blanc at your seat during the train journey. Before the end of your trip, a snack and a drink will be served.

The final benefit of this travel class is that you can arrive at the security terminal at the last minute. You're able to arrive up to 10 minutes before departure, instead of the usual 40 minutes.

How much is the train from Amsterdam to London?

How to travel on the Eurostar train between Amsterdam and London:

You can book your ticket here. The 2nd class option is the Standard cabin. If you choose first-class, you see two prices. The lower price is the Standard Premier class, the higher price on the right is the Business Premier fare.

Check-in for Your Train at Amsterdam or Rotterdam

When you arrive at Amsterdam (or Rotterdam), you'll see signs for London and Passport control. Traveling on Eurostar is very similar to traveling by plane. Unlike with regular trains, there is a security check, passport control, and you have to check your luggage.

The main difference is that you can take more luggage, and there are no liquid restrictions. A significant benefit is also that you'll pass Dutch passport control and British passport control (and customs) here in Holland, saving you time in London. When you fly, you have to deal with all the formalities after arrival.

It's Time to Board Your Train

Passengers who are boarding the Eurostar High-Speed train between Amsterdam and London.

Once you get out on the platform, take a look at your ticket for your coach and seat number. Coach numbers will be shown on digital panels on the train (next to the doors). Staff will be available at the platform to guide you to the right carriage if needed. Once on board, there is plenty of space to store your luggage.

Then it's time to sit back and relax, or start to work. Before you know it, you've already passed Holland and Belgium. Once in France, you very quickly enter the channel tunnel. In just 30 minutes, you're whisked under the sea to the UK. Then it's only a short hour through the lovely English countryside (Kent is known as the garden of England) before the train pulls into London St. Pancras station!

For us, one of the most fun things about riding the high-speed train are those parts of the journey when you drive parallel to motorways. Cars suddenly seem to travel at slow motion speeds while, in reality, they drive 90 miles per hour.

Did this post about the Eurostar high-speed train help you?

We hope this post helped you to learn more about the Eurostar trains. And with deciding if it's the right mode of transport for you. Join the conversation in the comments below and let us know if you're going to travel by train or not. We would love to hear what you chose and why.

​Also, don't forget to sign up for our valuable newsletter right below. Each one is full of useful tips for planning your trip. Plus, ideas for things to do in Amsterdam and beyond!

We keep you in the loop about special events, new blog posts, and deals we find. Don't worry, we hate to get spam in our inbox just as much as you do. You can unsubscribe at any moment.

Want to share this post or save it for later? Then why not use the share buttons below? Or save this article in your browser's favorites bar. Click ctrl+D (or cmd+D on a Mac), and create a Holland folder.

Want to share this post, or save it for later? Then tab on your screen once to see the share buttons below. Or save this article as a bookmark > Press the sharing icon at the bottom of your screen (arrow pointing upwards) > Then click "Add Bookmark".

We’re Herman and Gerjo, two locals from the Netherlands. We’d love to inspire you to see more of Holland than most people do. Your time is valuable, our aim is make every day of your trip memorable!

This page contains affiliate links. If you make a purchase via these links, we’ll earn a small commission, at no additional cost to you.

The card we use.
40 currencies. 1 card.
0 sneaky fees.
Perfect for travellers.

Available in the US, the UK, Australia, New Zealand, Singapore, and the EU

We use this card on every trip. It has saved us money and time!

Save on single ticket fares: Get a GVB (multi)day ticket before you go 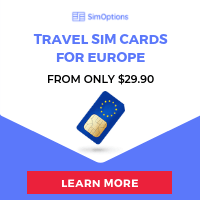 Please log in again. The login page will open in a new tab. After logging in you can close it and return to this page.

Help spread the word. You're awesome for doing it!